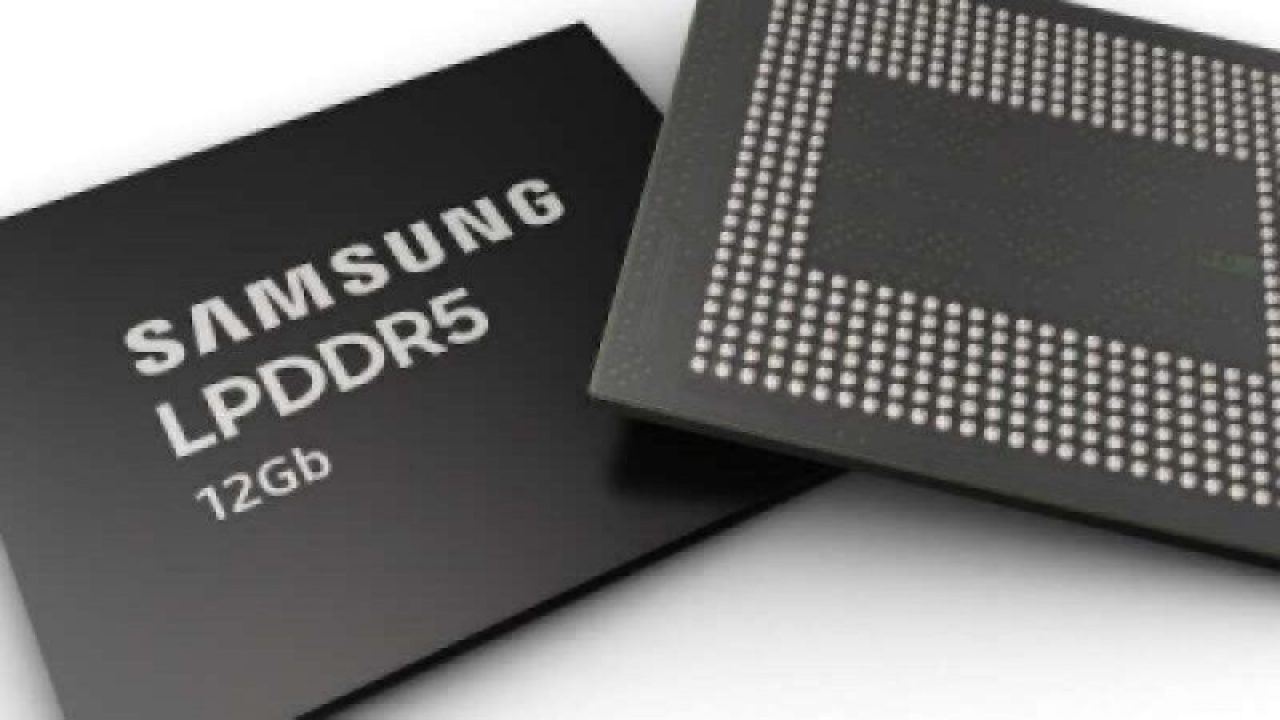 Only five months after announcing mass production of its 12-GB LPDDR4X, Samsung’s 12-Gb LPDDR5 mobile DRAM is out of the gate in mass quantities too — targeted at premium smartphones that are expected to be 5G-capable and run artificial intelligence (AI) applications.

While the difference between LPDDR4 and LPDDR4X was a relatively minor voltage change, it was a major leap from LPDDR4X and LPDDR5. In terms of speeds and feeds, Steve Lum, senior product marketing manager at Samsung Semiconductor, Inc., said the 12-Gb LPDDR5 is approximately 1.3 times faster than the LPDDR4X mobile memory found in today’s smartphones; the LPDDR4X comes in at 4.2 Gbps. As part of a 12-GB package, the LPDDR5 can transfer 44 GB of data (the equivalent of 12 full-HD movies) in a second.

Just as important as the performance improvements, said Lum, is the reduction in power consumption: Samsung’s LPDDR5 chip uses up to 30 percent less power than its predecessor by integrating a new circuit design with enhanced clocking, training, and a low-power feature. “The challenge that is always presented to the memory makers, especially in the low power DRAM arena, is constantly providing a higher and higher level of performance, but at the same time, providing improved power efficiency.

When it comes to what’s consuming the power, it’s not so much the 5G networking that’s going to use more energy, but that 5G means a much bigger and faster pipeline for premium smartphone users to move more data, including high quality video, on and off their phones, either through streaming or file transfers. The higher the resolution, said Lum, the more frames that must be buffered before getting stored in the flash memory.

AI on smartphones means the device will be doing more inferencing, said Lum, and there can’t be delays when asking an application to do something, such as image recognition. “There is always pressure in terms of providing higher levels of bandwidth as you put more and more sophisticated inferencing on these applications,” he said. “Any latency or lag just detracts from the user experience, and everybody wants to provide the best user experience possible.”

Samsung’s 12-Gb LPDDR5 mobile DRAM is out of the gate only five months after the company announced mass production of the 12-GB LPDDR4X. (Source: Samsung)

While Samsung is touting its latest LPDDR5 as readying smartphones for 5G and AI, Jim Handy, principal analyst with Objective Analysis, said the real story is the reduction in power while providing more memory with fewer DRAM chips. The lower power footprint comes at a time when battery makers are also doing their part to put more power in a smaller package. “The consequence of that is that if one of those batteries fails, it ends up being kind of like an explosive,” he said, that’s why travelers at airports are asked if they have spare batteries in their bags. In the meantime, more power from batteries and reduced consumption from the LPDDR mean the “reckless number of functions” being added to smartphones will continue unabated.

In the meantime, LPDDR memory tends to pave the path for standard DRAM interfaces, said Handy. “The learning that has gone into LPDDR5 is going to be applied to standard DDR5 when that ends up being used in standard computing applications.” The DDR5 specification has yet to be finalized by the JEDEC Solid State Technology Association — although SK Hynix announced last fall it had developed the industry’s first DDR5 DRAM that is compliant with the pending standard, and other vendors are expected to ship product by late this year.

Unlike other established memories that are finding new uses in emerging applications, LPDDR remains a smartphone and tablet memory, as the latter are essentially large-screen cellphones with the radio removed, said Handy. And although automotive has become a growing market for various types of memory — including GDDR to deliver the speeds necessary to support autonomy — for now, regular DRAM is still enough for cars, he said. “Today’s cars tend to use very standard products.”

Earlier this year, JEDEC gave the latest LPDDR standard a significant jump in I/O rate compared to the first iteration of its predecessor. JESD209-5, the LPDDR5 standard for low power memory devices, operates at an input/output (I/O) rate of 6400 MT/s, 50 per cent higher than that of the first version of LPDDR4, which came in at 3200 MT/s when it was published in 2014. The doubling of memory throughput was aimed at boosting the speed and efficiency of mobile computing devices such as smartphones, tablets, and ultra-thin notebooks.