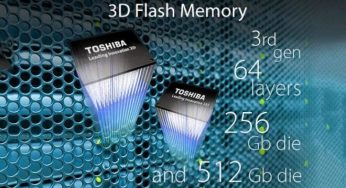 Toshiba has released a 512Gb (64GB), 64-layer device with 3b-per-cell triple-level cell (TLC) technology to its BiCS Flash product line. This technology will enable a 1TB chip solution. BiCS Flash is a 3D flash memory stacked cell structure, and is suitable for applications that require high capacity and performance, such as enterprise and consumer solid state drives, including Toshiba’s own SSD portfolio.

A 1TB product with a 16-die stacked architecture, in a single package, Toshiba’s 512Gb BiCS Flash device is based on its third generation 64-layer stacking process that increases memory capacity per silicon wafer and leads to a reduction of cost-per-bit.