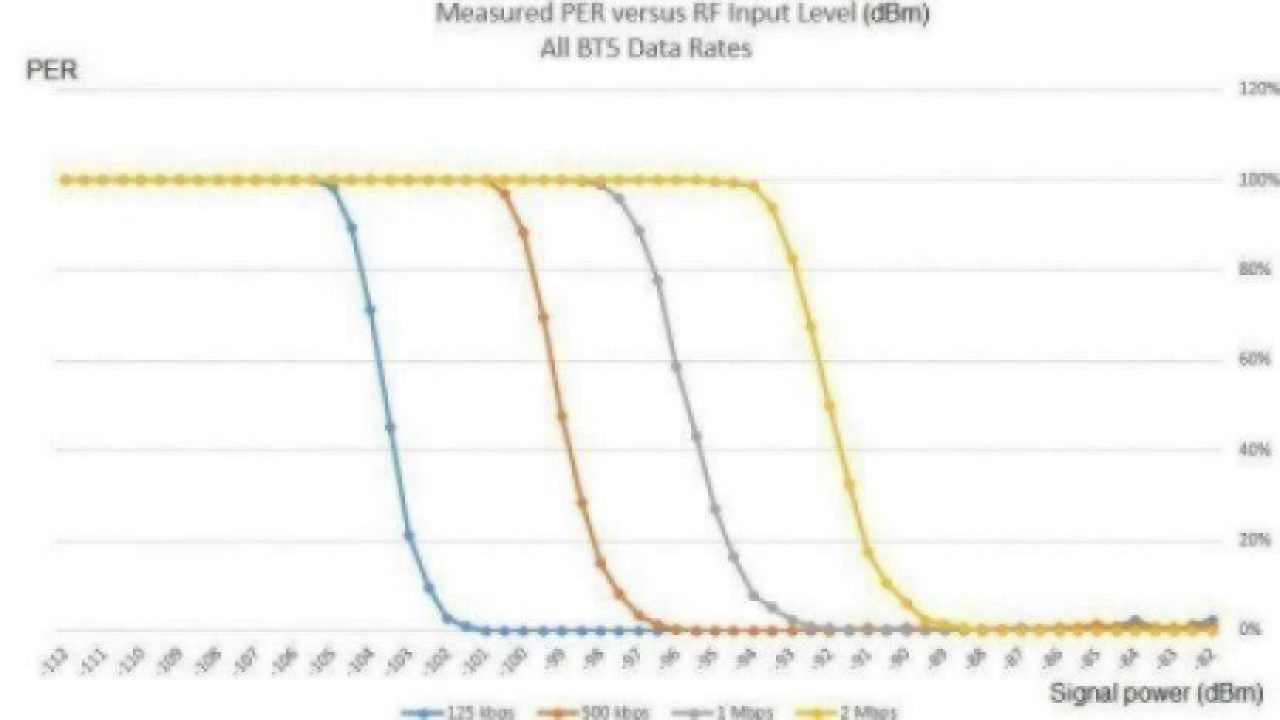 No single wireless technology is ideal for all internet of things (IoT) applications. For short range, low power, and low data rates, the most common choices are ZigBee, Z-Wave, and Bluetooth Low Energy. With new enhancements that are being added to Bluetooth, the wireless link will become even more appealing and its usage will increase in this category of IoT applications.

Bluetooth 5 is adding capabilities to improve range and increase data throughput. It will support mesh networks that can improve reliability while maintaining low power consumption. Let’s look at the key physical layer enhancements being introduced in Bluetooth 5, RF measurements on actual Bluetooth 5 devices, and RF measurement techniques and challenges.

Bluetooth 4 uses a data rate of 1 Mbps, but Bluetooth 5 offers new data rates of 125 kbps and 500 kbps. 500 kbps uses two-times coding gain, which replaces half the user data with coding bits. With 125 kbps, only one-eighth of the data transmitted is user data and 7/8ths is coding bits. This coding method, along with receiver improvements that search for pattern correlation, provides the equivalent of 12 dB of coding gain, effectively increasing receiver sensitivity and providing a theoretical improvement of up to four times the range. Many IoT applications require only very low data rates, so the tradeoff of data rate versus range is often acceptable. For applications that aren’t limited by battery power, the Bluetooth 5 spec allows for higher transmitter power as well. The current Bluetooth 4 specification allows a maximum of +10 dBm, and this has been increased to +20 dBm in Bluetooth 5.

These range improvements will make Bluetooth 5 more reliable in existing applications and more desirable in longer-range applications such as home automation and security. Figure 1 shows Packet Error Rate (PER) curves for a Bluetooth 5 device with data rates of 125 kbps, 500 kbps, 1 Mbps, and 2 Mbps, demonstrating the receiver sensitivity improvement that is achieved by using lower data rates. 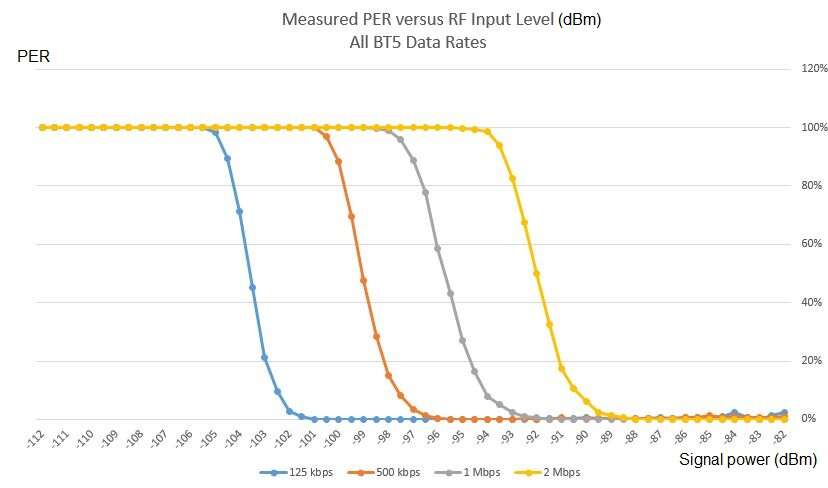 Figure 1 PER Curves for each allowable data rate on BT5 device. The curves show that for the lowest data rate (125 kbps), you need the least amount of power (about −102 dBm or less) to keep the near zero PER. At 2 Mbps, the power needed rises to about −90 dBm.

Bluetooth uses a very simple modulation scheme that has 1 bit per symbol. By increasing the symbol rate to 2 Msymbol/sec, the peak data rate is now 2 Mbps. There are no coding options when using this higher symbol rate, so it will be most useful for shorter range, infrequent usages such as software updates. This higher symbol rate does increase spectrum usage. The current Bluetooth 4 uses approximately 1 MHz of bandwidth, and with 2 Mbps in Bluetooth 5, this increases to nearly 2 MHz of bandwidth. The Bluetooth Low Energy channels are spaced at 2 MHz increments, so this increased bandwidth still fits into the existing defined frequency channels.

The right side of Figure 2 shows an RF measurement of a 2 Mbps burst from Bluetooth 5 device. The packet data rate and FM deviation are double what they are in equivalent 1 Mbps measurements. 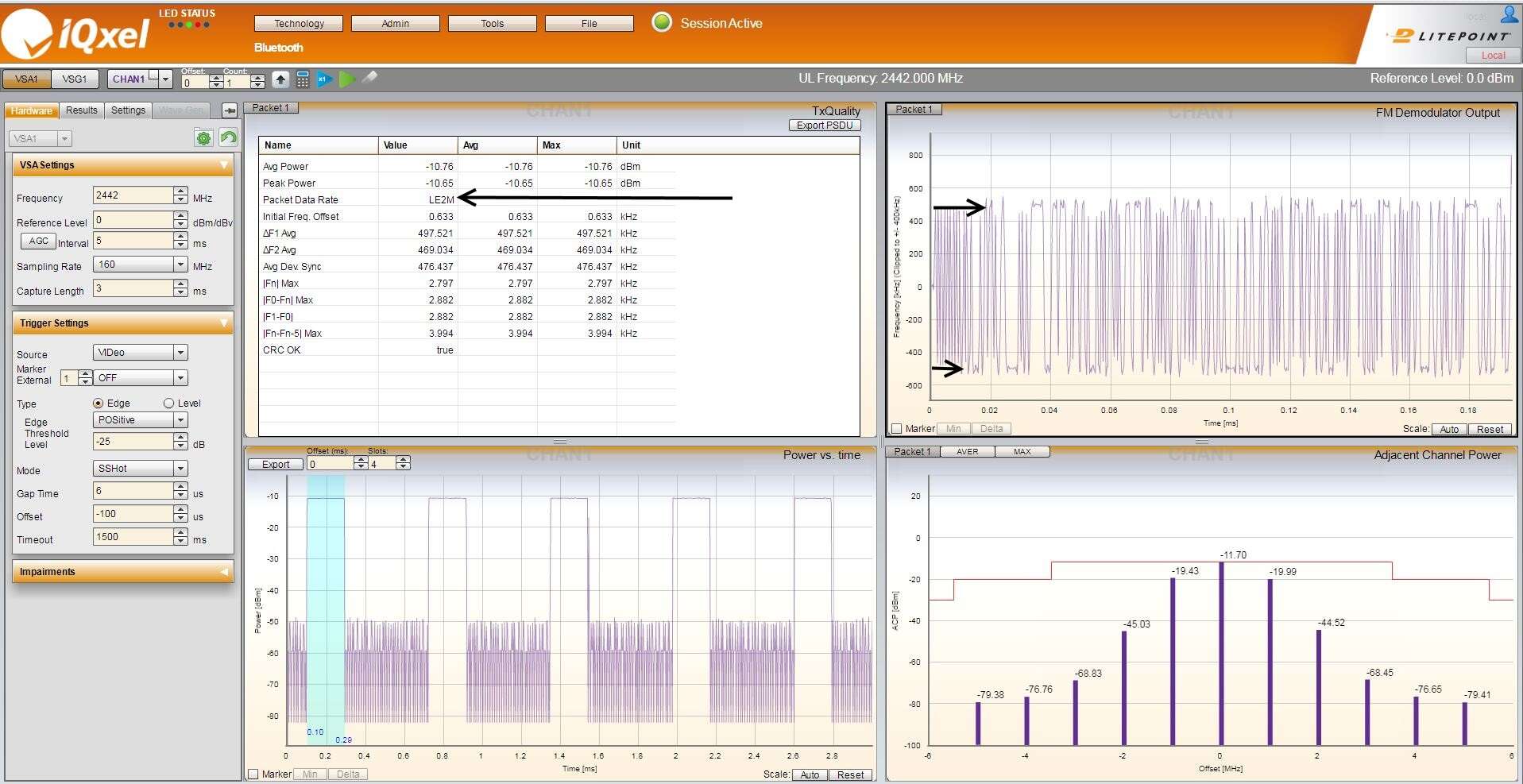 Figure 2 Graphical Display of 2 Mbps capture and measurement shows the FM deviation over time as data passed over the BT5 link.

Larger data packets for BT5 beacons
Beacon devices are expected to become more prevalent with Bluetooth 5. Not only will these beacons have longer range, but they can also now transmit significantly larger amounts of data than was possible with Bluetooth 4. In Bluetooth Low Energy, beacons use a method known as Advertising Packets to transmit short bursts of data at consistent intervals. With Bluetooth 4, there are three dedicated "Advertising Channels" and each channel can transmit a maximum of 31 bytes of data in each packet. This is quite limiting for some applications and Bluetooth 5 addresses this with a new advertising scheme.

In Bluetooth 5, the devices will continue to transmit on the three dedicated advertising channels, but each of these relatively short transmissions becomes simply a pointer to other data channels that contain significantly more data. Imagine a medical device that needs to transmit data on multiple physical parameters. You cannot get much information in 31 bytes of data, but with the new method defined in Bluetooth 5, it's now possible to transmit hundreds of bytes of data without the complexity of pairing the two devices and establishing a full connection.

RF testing
For RF testing, Bluetooth 5 continues to use Direct Test Mode (DTM), which was defined by the Bluetooth Special Interest Group (SIG). In DTM the device under test is controlled via a wired communication method such as USB or universal asynchronous receiver-transmitter (UART). Binary commands are sent to the device to turn on the transmitter or receiver, depending on which type of RF test is being performed. Bluetooth 5 follows this same methodology by introducing extensions to the current DTM commands so that it can now specify a data rate of 125 kbps, 500 kbps, 1 Mbps, or 2 Mbps.

Each of these data rates has different coding and modulation. With the new lower data rates, designers can expect to see significant improvements in receiver sensitivity with some leading devices achieving better than -100 dBm receiver sensitivity. This improved performance will put additional requirements on the device receiver to have a lower noise floor and less de-sense from other external sources.

On the transmitter side, there is very little physical layer difference for 125 kbps, 500 kbps, or 1 Mbps transmissions. These speeds use 1 Msymbol/sec modulation so at the physical layer the signals all have the same RF characteristics. A manufacturer will need to verify all the different rates as part of design validation, but in manufacturing, performing transmitter testing at just the 1 Mbps and 2 Mbps data rates should be sufficient. 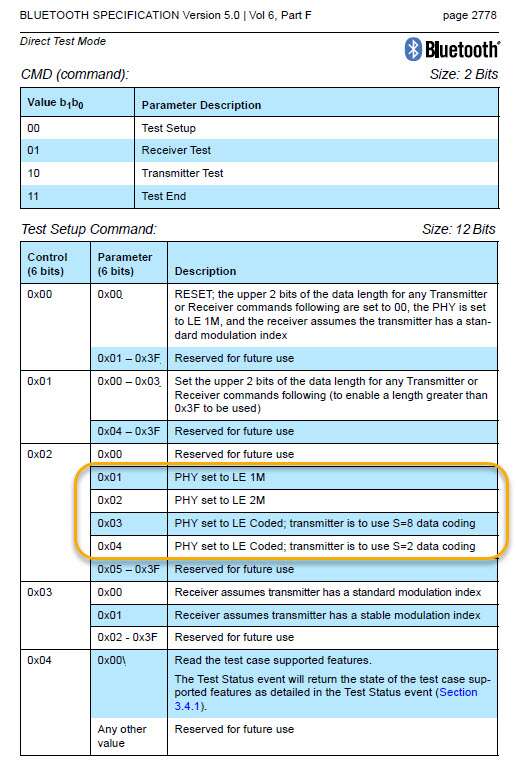 Mesh networks
Mesh networks let devices communicate over longer distances because each device in the network can act as a relay. Both ZigBee and Z-Wave include mesh networks, which improves reliability for longer range communications. As an example, suppose you wish to control a security light or read an outdoor thermometer but the distance is too great to communicate directly. This is OK, because with Bluetooth 5 mesh networking, your phone simply communicates with the closest device in the network and the messages are relayed to and from the device with which that you are trying to communicate. The key challenge to implement this in Bluetooth will be interoperability of devices from multiple vendors. Today, many Bluetooth applications are 1:1, meaning a device only needs to work properly with a few leading smartphones to cover most user applications. With Bluetooth 5 devices that are intended to work within mesh networks, designers will need to validate performance with dozens of devices to ensure reliability in a multi-vendor environment.

Bluetooth 5 will be good for consumers and IoT vendors; it's expected to see significant increases in adoption in low energy, low data rate, short-range applications. There will be new challenges with interoperability and parametric testing, but equipment vendors are already gearing up and test solutions are now available to help with early designs.