Rift Between Apple and Qualcomm Widens 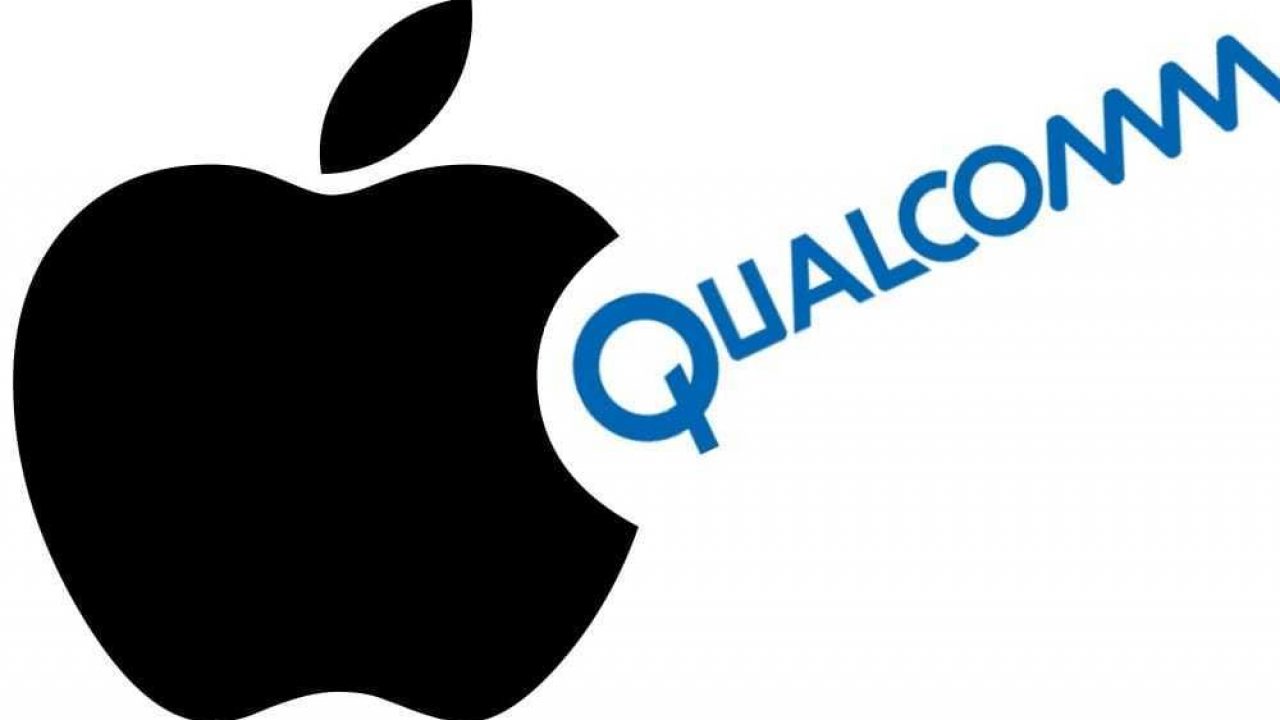 Apple wants engineers with cellular modem expertise in Qualcomm's backyard of San Diego as the two ramp up their battle over patent licensing.

SAN JOSE, Calif. — The latest battle of the all-out war between Apple and Qualcomm is taking a human toll. The iPhone designer is hiring cellular baseband engineers in San Diego, Qualcomm’s backyard.

One is for a cellular modem system architect with “deep understanding of wireless radio standards (including but not limited to 5G-NR, LTE, UMTS, 802.11ax, 802.11ad) and their implications on physical layer algorithms and procedures.”

Like other smartphone makers, Apple has a cadre of engineers with all forms of cellular expertise to help it choose third-party silicon. The latest postings are looking for actual chip designers.

The job posts suggest that Apple will take the next step from designing its own A-Series applications processors to ones with integrated cellular modems, the sorts of components that most of its handset rivals use.

For example, one job ad calls for a physical verification engineer with experience in “the development of wireless subsystems by leading verification efforts of Wireless PHY design, integration of Baseband PHY with Radio model, and upper layer SoC.”

Anshel Sag, an analyst for Moor Insights and Strategies based in San Diego, noticed and tweeted about the ads he found on a local tech site earlier this week. 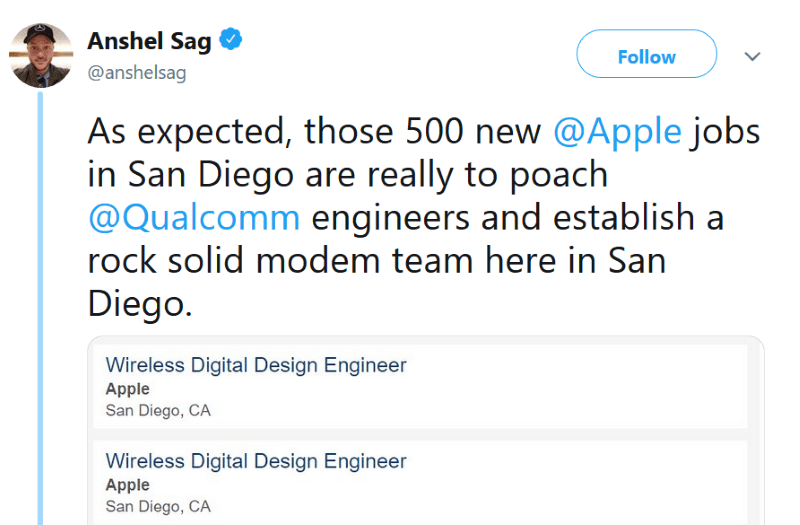 “Apple is opening an office in San Diego with 500 people, and in the last couple of months, our mayor said it may open with a thousand people … Companies [post jobs] because they want their plans public and may hope to attract disgruntled engineers,” Sag said.

Qualcomm made San Diego a hotbed for cellular engineering. Intel, Huawei, and Mediatek are among its baseband-chip rivals with significant operations there. In the wake of giving up its bid to buy NXP, Qualcomm shaved a billion dollars off of its balance sheet with layoffs that mainly affected an emerging server SoC group.

Apple’s move to staff up its own modem group is the latest twist in the long saga of a fatal attraction between Apple and Qualcomm. In 2005, when Apple was quietly designing the first iPhone, it asked Qualcomm for samples of its cellular modems. Instead of chips, it got a stern warning that it had to sign a patent license first, according to an Apple procurement manager.

Apple was miffed, and the original iPhone and its follow-on model shipped with modems from Infineon. But the two companies got together again a few years later when Apple decided that it wanted to start using Qualcomm’s chips for its first 3G phone, in part because it needed CDMA support.

Exclusive deals and flirting with Intel

Apple and Qualcomm wound up negotiating a suite of agreements that included Qualcomm paying Apple a billion dollars to transition the iPhone from Infineon modems. Qualcomm got exclusivity as Apple’s modem supplier based on a complex schedule of the payments that Qualcomm made and Apple would have to refund if it used another company’s modem.

It was a rocky relationship for years. In 2014, Apple was unhappy with the relationship and ramped up a so-called Project Antique in an effort to find a second source of cellular modems. It flirted with using in an iPad Mini a modem from the former Infineon group now owned by Intel.

Ultimately, Apple abandoned the Intel plan. The two sides disputed the reasons in an antitrust case now awaiting a ruling from a San Jose judge. 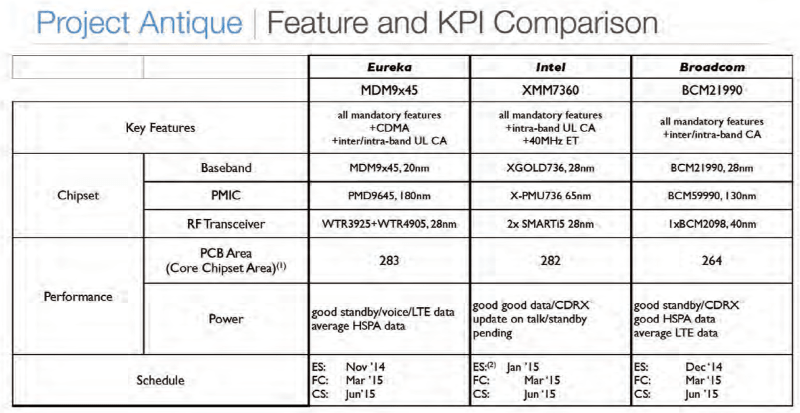 Apple internal documents show that in 2014, it considered Broadcom and Intel chips as alternatives to Q’comm’s modems. (Source: FTC vs. Qualcomm)

The big breakup came in 2016, when Apple decided to start using the Intel modems. At about the same time, the two came to blows, first privately in a series of regulatory disputes in South Korea and elsewhere that spilled over to the U.S. courts.

Today, Apple uses Intel modems exclusively in its new products but said in court that it wants a second source. Apple and Qualcomm both suggested binding arbitration at different times but could not agree on the terms for it.

Now clearly, Apple has decided that it is ready to be its own source. That will be a loss of potentially hundreds of millions of dollars a year for Intel. However, Intel had already decided that its modem business would be a limited one when it decided not to pursue entering the market for mobile applications processors.

Apple has been designing its own app processors for the iPhone and iPad successfully for years, including neural-network accelerator blocks in the latest versions. But designing cellular modems will stretch even Apple’s prowess.

The RF expertise required for mature LTE and next-gen 5G cellular chips is in the hands of relatively few engineers. In addition, Qualcomm claims that it holds more than 20,000 standards-essential patents on cellular technologies, so it will surely sue for patent infringement any iPhones using Apple modems.

Qualcomm is already suing Apple for infringement of other patents in courts around the world. It is seeking injunctions that would be painful enough to prod Apple into paying its preferred 5% per handset patent royalties as well as using its chips.

Given the work ahead, Apple is not likely to ship handsets with its own modems for at least three years. However, if its strategy to hire many key Qualcomm cellular engineers succeeds, it may find that it gets more revenge in the marketplace than in court.